Finally, people seem to be thinking more and more about food independence. That’s excellent and something we hold as a central tenet in Off-Grid Living; food is control. If you don’t control your food, you will not control your off-grid life. Details into each of all the food topics are beyond the scope of this article, however, you will learn one of the ancient survival technique of food preservation.

Gardening, aquaponics, raising livestock, hunting, trapping, fishing, preserving meats, underground root cellar food storage, etc, all essential food survival options that are worth searching information for your off grid living. Include them into your how to live off the grid plans. And if done right, you can create self-supporting systems.

Self-supporting systems such as turning waste streams into compost, using compost for large garden plots. Growing foods that feed your livestock. Using livestock for meats, cheeses, and milk. And then breeding your livestock to replace the ones you use for meat.

Working towards getting your independent food systems in place to reduce your dependence on the food grocery store system is one of the main keys to your off-grid living.

When humans discovered they could increase the shelf life of their food by storing it underground; society was revolutionized. All of a sudden, humans had the ability to preserve grain, nuts, fresh fruit, and vegetables for longer periods of time.

Immediate food consumption was no longer necessary; having to gorge on it all before it went bad.

Instead, we could now stockpile and preserve our harvests in root cellars to prepare for the lean winter months. It’s the technology that frontier families used to maintain a healthy diet and avoid starvation during harsh cold winters.

Because of refrigerators our society has all but lost this old technology, knowledge, and know-how. Which is a damn shame because there are so many reasons why a backup supply of healthy food is extremely useful – life-saving.

So a root cellar is an excellent off-grid food preservation system. It’s pretty much a requirement for anyone who’s concerned about losing grid power for good.

But building a root cellar is not a quick project and one you shouldn’t rush. You need to take your time for proper planning. Because if you don’t, chances are good that you’ll make mistakes. And food storage mistakes can jeopardize all of your food stockpiling efforts.

Root cellars have one thing in common. They take advantage of stable underground temperatures!

Why underground? It all has to do with the seasonal variation in temperatures. As you dig down into the earth, the layers of soil between you and the surface act as a blanket insulator from the surface. For example, in the hot summer, underground temperatures are much cooler than the surface. In the winter, a few feet underground is much warmer than a howling blizzard outside.

A root cellar takes advantage of these stable cool temperatures. And temperature control is an important component in prolonging the shelf life of perishable foods. Because we all know that cool temperatures extend our perishable food’s shelf life. For proof of this, just leave your milk out on the counter all afternoon in the summer. Near-instant spoilage, while that same milk will last weeks in a cool refrigerator.

A root cellar is a nature’s refrigerator. Without the need for chemical refrigerants or electricity. And that’s the simple beauty of underground food storage, it extends your food’s shelf life without depending on modern technologies.

Using the earth’s lower temperatures is smart, but there are unique challenges you’ll need to overcome to do so successfully.

Depending on your time, energy, and funds, there are two main types of root cellars to choose from: small and large.

Small underground food storage systems primarily consist of buried containers, while larger setups typically include a separate building This option is similar to burying a survival cache. But instead of storing gear and equipment, with this option, you are focusing on storing food.

Remember, anything stored underground at a depth of several feet will stay at a consistently cool temperature between 50-55-degrees F (regionally dependent).

The best containers for this method are the ones not susceptible to water damage or degradation. Naturally, that eliminates wood crates or cardboard boxes because, over the course of time, natural processes will eat away at these containers and eventually devour whatever is inside.

Metal garbage cans, plastic drums or plastic storage totes are the best options to use. Just make sure the container is made out of strong materials to prevent collapse and won’t degrade when in contact with moisture for extended periods of time. This straightforward method of underground food storage is the easiest on a tight budget. It’s also the quickest to achieve, and acquiring materials is not difficult. It’s also the closest method to the original root cellar.

When Indians and native Australians buried their foods, they did so in clay pots, but they surely would have used waterproof plastic containers if available. But for them, plastic was still centuries away.

The limitations to these smaller containers become obvious once you want to expand your underground food storage supply. If you live in freezing climates, expect your buried food container to be inaccessible during the cold months. When the ground freezes, it becomes difficult or nearly impossible to dig it back up. Also, extremely low temperatures present a liability for sealed containers; anything stored in a jar, can, or bottle will likely freeze and burst its container.

So if you want a single large root cellar as opposed to lots of smaller ones, you need a larger walk-in backyard root cellar.

Having a couple of barrels full of buried food is good, but having a large room full of survival food is even better. The good news is constructing a backyard root cellar is the kind of project that supports you during a large-scale disaster. A walk-in style root cellar is a step up from buried caches. But they do require a bit more time and money.

Most root cellars are built using stone, wood, mortar (cement), sandbags, and sod. Newer ones may be made of concrete with sod on top of common construction methods:

– Digging down into the ground and erecting a shed or house over the cellar (access is via a trap door in the shed).

– Digging into the side of a hill (easier to excavate and facilitates water drainage).

– Building a structure at ground level and piling rocks, earth, and/or sod around and over it. This may be easier to build on rocky terrain where excavation is difficult. 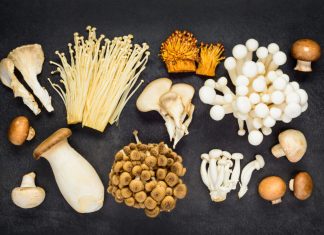 Types of Mushrooms and How to Grow Them – Off-Grid Living 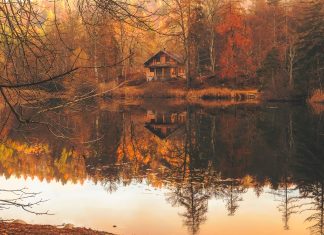 Where Do You Want to Live Off Grid?